The Gorse Fox got up soon after 7:00. It was a bit overcast and the water outside the cottage was like a sheet of glass - no ripple dared sully the perfect surface. As the morning began to take shape, the wind or tide changed and the magic was broken.

Once the Silver Vixen was up and about and we had had some breakfast we decided on the day’s plan. No rain was forecast and it looked as if it would be sunny with plenty of clouds scudding across the sky. We decided on a return to Trelissick. 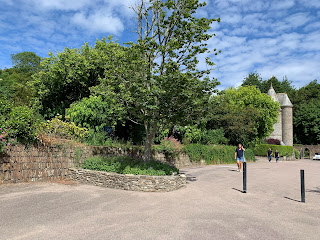 Trelissick House and Garden sits on a peninsula on the River Fal, near Feock and just close to the King Harry Ferry which shuttles people and cars across the river to the Roseland Peninsula. The Gorse Fox thinks it was about 1989 when we last visited - with Cousteau-Cub and Urban-Cub in tow. 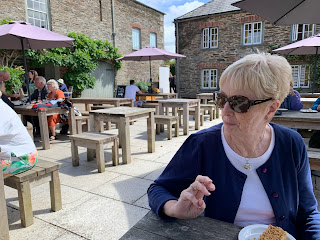 We started with a coffee in the courtyard cafe - it was beautifully sunny and sheltered from any breeze. Despite other people being around, it was strangely tranquil. 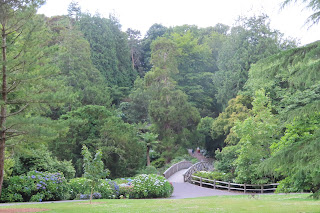 Moving on, we made our way through the gardens, weaving our way along the maze of paths. There were some wonderful specimen trees which seemed to dominate their settings. As we walked, beautiful vistas would open up, showing manicured lawns, wooded glades, bridges, summer houses, and, of course, views across the river. 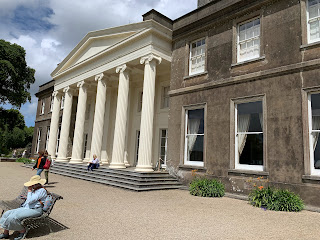 We finally looped back up to the house. This had not been open during our previous visit. Even now, only a few rooms are open to visitors - the house only becoming a National Trust property in 2013. The rooms were interesting in that the showed some fabulous china. Why? Was the obvious question. Well, it turns out that William Taylor Copeland took over the running of the Spode china factory after the founder died. This was, evidently, how they had made their fortune.

We finished the visit with a wander round the NT Shop and then an on-site Gallery full of local crafts - paintings, embroidery, stained glass mirrors, jewellery and heavens knows what else.

It didn’t take long to get back to Falmouth. We dropped off some stuff at the cottage and then decided to explore some more. We headed west along Church Street, Market Street and along past the Prince of Wales Pier and up the old High Street. Not having any specific destination in mind we turned around and, retracing our steps, walked back to the Events Square. Tucked in the corner was Lawrance’s Bar and Bakery. This seemed like an interesting concept and was worthy of a visit.

The first thing that struck the Gorse Fox was how pink it was. Ellie would love it. It was clearly aimed at a predominantly female audience. The menu is basically filled bagels, sticky cakes and bakes, and cocktails. There was a cursory nod to beer drinkers with a few bottled beers. The Silver Vixen chose a Victoria sandwich and the Gorse Fox had a tomato, mozzarella, and pesto bagel. We both had a beer. Our conclusion was that it was a good idea and deserved to do well.

We wandered across the square and booked a table at “The Shack” for early evening then made our way back towards the cottage. We found a spot at the end of Custom House Quay and settled down in the afternoon sunshine to watch the boats and ferries shuttle back and forth. It really was delightful.

Early evening saw us return too “The Shack”. This restaurant specialises in seafood and the menu is very dependent on what the local fishermen have landed. We both decided on some haddock but saw other people tucking into mountains of mussels or smashing their way into huge crabs.

It was time to return to the cottage and settle in for the evening.
Posted by The Gorse Fox at 8:30 pm