We were up early. The plan was to leave at 8:00. The packing had all been done last night, so it was just a matter of loading the car and having a spot of breakfast. No coffee was consumed - tea only. This ensured that comfort stops were not required sooner than was reasonable.

The roads, heading West, were empty and we made good time. After Somme internal debate the Gorse Fox decided to stick to the more picturesqueJurassic route rather than nipping up to the A303. Had it not been for the closure of the A35 on the run in to Honiton, this would have been the right choice. As it was we had to divert and find our way down to the A30 several miles before the town.

We stopped for a comfort break at Exeter. (This was always where we would stop when driving down with the girls). A coffee and pastry later, we were back on the road. The road was deserted and we whizzed down to Truro and then round to Falmouth. 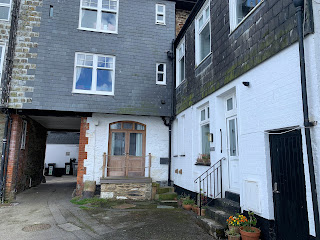 Falmouth was a challenge. The written instructions were incomplete and the SatNav kept trying to send us down roads that were closed to vehicles. Eventually, the Gorse Fox and Silver Vixen found the correct route through to the Quay. That was where the next challenge awaited. The cottage was through a narrow archway and opposite the entrance to the archway was scaffolding cladding an old building. Could the Gorse Fox reverse into the arch? Was the archway wide enough to accommodate the car? The answer to both was yes, but only just. There couldn’t have been more than a few centimetres spare either side of the car and the reversing cameras and all round sensors earned their keep. We made it without incident.

Once the car was unloaded we drove it to the allotted parking space, back up the other side of the high street - this was a relief, as it meant that once there, we didn’t have to negotiate the arch again!

Once we were unpacked, we made the most of the sunny (if blustery) afternoon and went for a walk. Shops may have changed hands, but Falmouth itself looks just the same. It was comfortable. It was familiar. Though mid afternoon, we decided to have dinner while we were out and could then settle down for the evening with having to go back out. We stopped at “The Shed” near the National Maritime Museum. We used it several times when we were last here and the Gorse Fox is happy to report that, six years on, it is still as good. 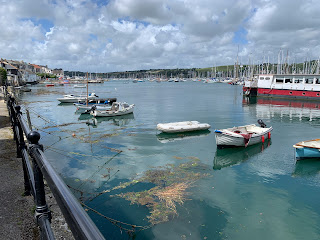 After dinner, we continued our walk for a while before heading back to the cottage. We hadn’t been back for long when the owner popped in to say hello and give us a quick run down on the equipment. The Gorse Fox should probable describe the cottage. It is tucked in a corner of a run of waterfront fishermen’s cottages. Despite being just off the height street and the quay, it is utterly silent except for the call of the gulls and the gentle lapping of the water outside. Downstairs is open plan with seating area, dining area, and kitchen. Upstairs, there are two bedrooms (both en suite) and a small study area. All of them overlook the harbour. It’s very comfortable and ideally situated.

The weather forecast for the week looks a bit changeable so we have not got specific plans. We decide what to do on a daily basis, once we have a better view of the day’s forecast.
Posted by The Gorse Fox at 9:00 pm