what a stunning day! It has been bright sunshine and but skies until late afternoon when some high cloud crept in. Now, as the Gorse Fox writes, there are some rain clouds gathering, but it is not clear whether it will come to anything.

Ellie was dropped off at the usual time. She hadn't really woken up and it was a few minutes before she sparked into life.Fed, washed, and dressed we took her to school and watched her charge into class as soon as the door opened.

The Gorse Fox had football. He took a leisurely drive across to Worthing, signed in, and changed into his boots. He was on team "Blue-2", one of two teams of 6, whereas the 2 other teams had 7 players. The first game (against 7) started well and though we had to work hard, we managed a 0-0 draw. Our attack were moving around well and passing well. As long as the Gorse Fox and Mo, at the back, did their job, we had a chance. The second game (against the other team of 6) was more open. Again it was hard but we managed a 2-2 draw. The last game was back against 7. This team looked the most potent and scored quite early on. Our attack kept probing and trying to overload the left wing. This left the right wing deserted. The Gorse Fox snuck up and waved at Jamaica-Mark. He pumped the ball across the pitch and the Gorse Fox trapped it then planted it firmly into the goal. We were level. From then on, our passing and recycling of the ball made the difference and we managed 3 further goals without reply. A very satisfactory morning.

The journey home was a bit of a pain. There are roadworks on the A29/Shripney Road. These caused a tailback right back along the Bognor Regis Relief Road - this took 25 minutes to traverse (it would normally take 2 minutes). Never mind. 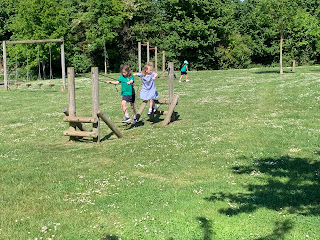 We collected Ellie from school. She wanted to play for a while in the park. It was such a nice afternoon that it made sense to let her run off some steam.

We stood and chatted to another grandparent as Ellie charged about from one bit of apparatus to the next. She is very sure footed and very confident on all the different frames, rope bridges, parallel bars and so forth.

We gave her dinner after we got home and then worked with her on identifying triangles, cones, pentagons and hexagons. The Silver Vixen also read with her (even though there is no homework this week).

Urban-Cub has just been along to collect her.